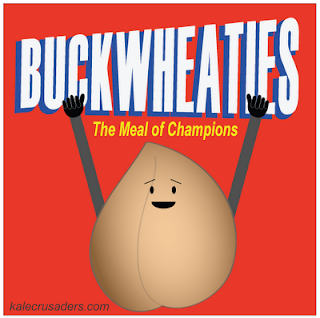 Buckwheatie is a three-time winner of the TastyBowl championships.  He played for a different team each time, taking on different positions to supplement his fellow foodstuffs.

Buckwheatie made the 2011 all-star team for his role in cereal and pancakes. During his rise to fame, he made several appearances on the TV dinner circuit, where he was deliciously tossed with pasta and served as a base for a noodle dish. But at his heart, Buckwheatie is a sweetie, making an all-time favorite appearance in buckwheat pudding!
Posted by Kale Crusaders at 7:10 AM