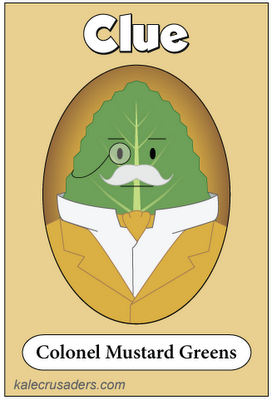 By the time they found him, it was too late.  He had grown a bit senile, and no one could really understand what he was talking about.  Wearing nothing more than an ascot, his skin green with age, he was roaming around the kitchen stuffing giblets of french fry into his mouth.  But confusion be damned, the facts were clear:

It was Colonel Mustard Greens.  In the kitchen.  With a...deep fryer?

Luckily, before his chlorophyll-driven rage, he managed to prepare a few snacks: edamame tofu soup, smokey greens, and a stew with flatbread.